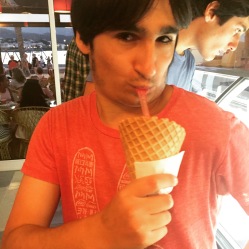 I am a lucky mom.  I have a son who is growing up to be an incredible young man.  Yes, he says and does awkward things at times, but he is learning and growing.  I see it more in the last year.  Noah thanks us, his parents, for always supporting him, even when he drove us crazy.

This year he realized and understood the importance of asking for help, going for help, and organizing his time.  Noah was on academic probation in the beginning of his sophomore year of college.  The probation was due to one bad grade in French.  It still baffles my family because he speaks French with my husband.  It was the grammar that threw him a curve ball and lack of organization when it came time to study.  We suggested tutoring, which is provided for free at Whittier College.  He said he would go, but never did.  He let his pride get in the way of his success.  We had many discussions about asking for help.  We talked about working in the real world and CEO and CFO’s all need a strong support and help from team members to make a company successful.  We would tell him repeatedly, the wisest people in the world are the people who are not afraid to ask for help.   Noah and I had this conversation several times over many months.

Once he read the probation letter and we discussed his options, he realized he needed to make a change.  For us, his options were to ask for help and work with an academic counselor or go to our local city college.  He made the decision to work hard and stay at Whittier.  He turned his attitude around.  Noah would meet with his academic counselor weekly, he would talk more with his professors, and even stay on campus over the weekend to study.

Now, Noah works for the summer.  It is his second summer as a courtesy clerk for Vons.  They rehired him this summer.  He works long hours cleaning the store, bagging groceries and retrieving carts.  He loves Thursdays because that is when he gets paid.

Now that Noah makes his own money, he offers to treat me to lunch or ice cream.  During our outings he always says, “I love you mom.  You’re the best.  Thank you for everything you have done for me.”  I am a very lucky mom.

I am Marie. I am a proud mom of Aspieteen. Actually, my son is now 20 years old. He is no longer a teen.
I am an educator in the public school system. I have seen and experienced many school districts not meeting the needs on students with IEPs. This is frustrating to me as an educator and as a parent. Districts and schools seem to focus on the money and feelings of teachers rather than what is best for the student to be successful.