Well, Nico and I had one of those nights.  He became irate about two things:  I belittle him and I make decisions about his life without discussing them with him.  This is for the most part true when it come to school and enrolling him in support camps or classes.  However, it was one of those nights where Nico was agitated and I was grumpy from a long day and in pain from an injured foot.  Nicolas wants to discuss this field trip that he was to go on through the special ed dept.  to the LAPD.   The kids were going to spend a day out of school and have Dodger Dogs, what could be so bad.  Well, Nico said became furious that I signed the permission slip and didn’t consult him.  He said none of his friends were going (which I am happy he found friends).  He said he wanted to be in school.  It wasn’t his message that upset me, but the tone and the anger that came with the message that sparked me.  After a challenging day at work and re-injuring my foot, I was in no mood to go ten rounds with Nico, each round being louder than the next.  I raised my voice back at him in a loud roar that shook the walls, this is something people should try not to do with kids with Aspergers.  Once I raised my voice, he raised his even louder.  We went two rounds of this back and forth.  Finally, I shouted back, “You have two choices:  We can stop here and discuss this later once we are done with studying for your test  or I can totally unleash all my frustrations and anger on you and we will get nowhere.”  Nico definitely had to think about this one.  What was he going to choose?   He decided for the “Mom and Nico time out”.  He made a good choice.   We studied for his test and then about a half-hour later, we discussed “How could he have asked me differently?”  He realized his tone was harsh in the beginning.   I explained I understood his feelings of wanting to make his own decision.  He is growing up and I do have to let go a bit.   We then discussed the issue as a family and made the decision together. 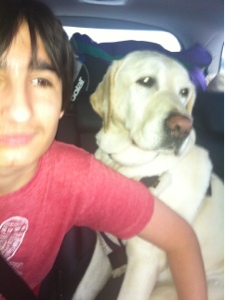 I am Marie. I am a proud mom of Aspieteen. Actually, my son is now 20 years old. He is no longer a teen.
I am an educator in the public school system. I have seen and experienced many school districts not meeting the needs on students with IEPs. This is frustrating to me as an educator and as a parent. Districts and schools seem to focus on the money and feelings of teachers rather than what is best for the student to be successful.